What is Focused Deterrence or The High Point Model? | High Point, NC
Skip to Main Content

What is Focused Deterrence or The High Point Model?

By 1998, the High Point Police Department implemented its version of the Boston approach. The "High Point Model" focused on violent repeat offenders. Like Boston, the efforts resulted in significant reductions in violent crime. Our agency moved away from being a "respond to calls for service agency."

We started engaging the community in a meaningful way, identifying our crime problem and focusing on the individuals driving it. We discovered that we could actually arrest fewer people, be more strategic (focused) with our prosecutions and drive down (deterrence) violent crime. These ideas at the time were in contrast with the larger law enforcement community.

Since 1998, the High Point Police Department has applied focused deterrence in several ways. We have used it to deter violent repeat offenders (VCTF), street-level drug dealers (DMI), and domestic violence offenders (DVIP). We have also banked a tremendous amount of community capital in large part, thanks to our partnership with High Point Community Against Violence (HPCAV).

You can see the full commitment of our agency to the challenge of violent crime reduction by the way we are structured. Units that are directly involved in reducing violent crime are placed in the same division under key personnel. This creates a seamless response to acts of violence while facilitating all intelligence gathering and strategic planning from one division.

Since 1998, we have demonstrated that by using focused deterrence, even in areas where crime is excessively high, that we can significantly reduce crime. In addition, we have proven that this can be done by making fewer arrests. This, combined with transparent methods, community involvement, and assistance to would-be-offenders, has pushed our department to the nation's forefront of violent crime reduction. Most important, it has earned us the support and respect of our community. 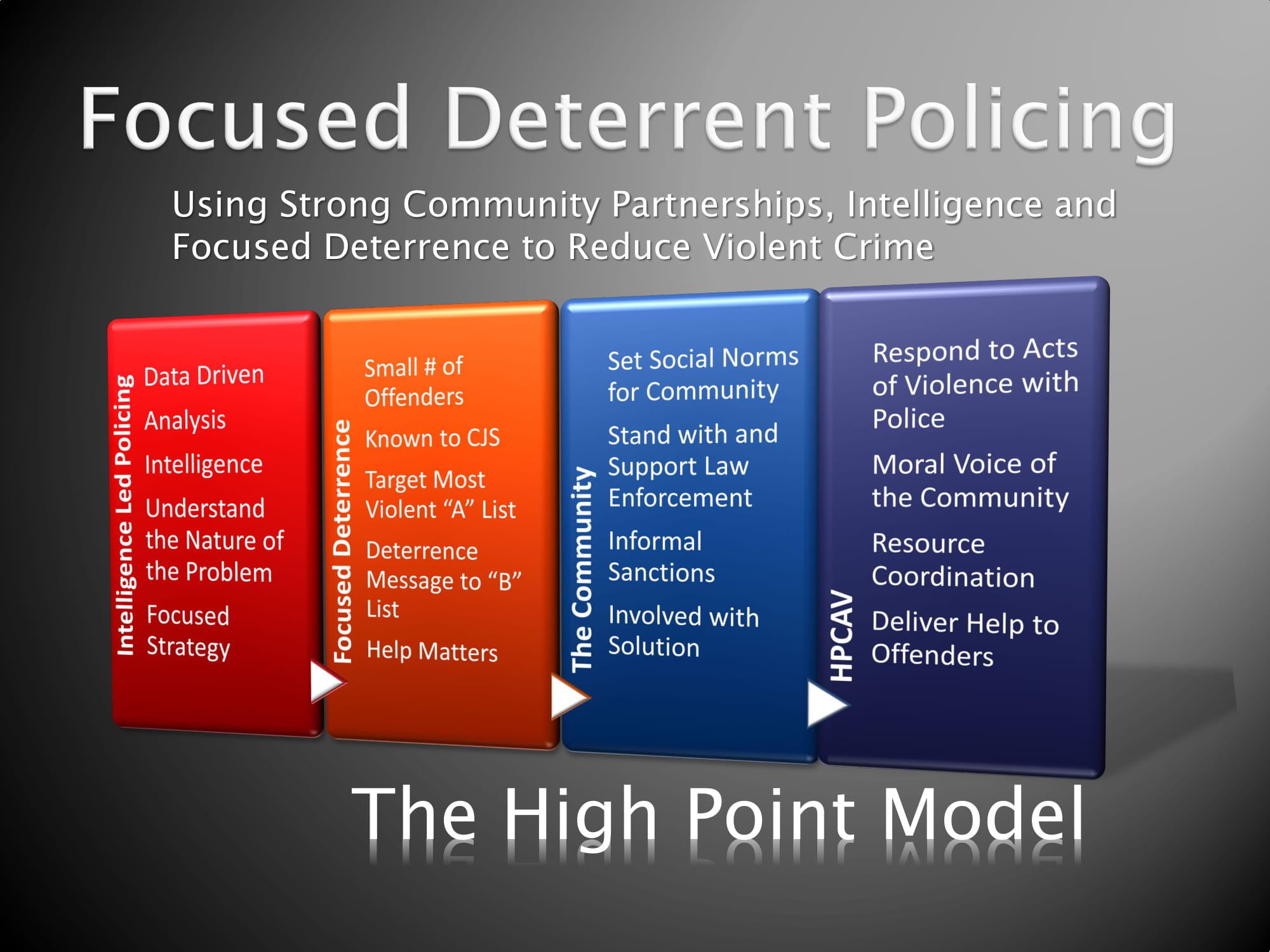 The steps involved in the High Point Model include:

These are not strategies to forgive offenders for serious criminal activity committed in the past. It is a promise to vigorously prosecute repeat, violent and/or group offenders who continue to engage in violent activity. It is an offer by the community (HPCAV) to assist those who want to change their lifestyles by delivering resources.

While all of these steps are critical to the strategies, our response to acts of violence sends some of the most important messages to the community and offenders as a whole. When we respond to violent acts in a coordinated and focused way, using all available resources, we remind everyone that "Our mission is to make High Point a safe city by developing leaders and employees in crimefighting, community engagement, training, and professional policing".